How to Cope With Your Picky Eater 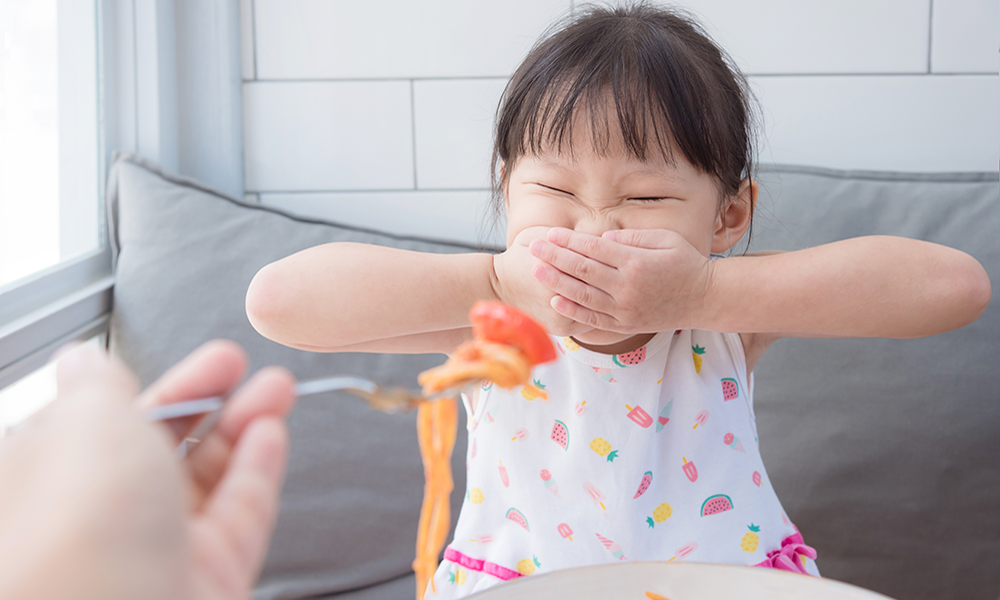 One of the most common frustrations for parents is when they have a picky eater on their hands. How common is it for a child to be considered a picky eater? In a study of 120 children who were studied from the age of 2 to 11, up to 22% of them were labeled a picky eater at one stage or another in their development.

Picky eating typically means that a child refuses to eat certain foods often or insists on eating the same foods over and over. While picky eating usually peaks in the toddler and preschool years, sometimes it can carry over into adulthood as well.

Parents may worry that their picky eater is not getting adequate nutrition for their growth and development, but in most cases, he is. However, it’s still important to address the issue in order to avoid nightly power struggles at the dinner table, not to mention the possibility that your child might develop a limited diet that could last their entire life.

If you find yourself at your wit’s end with your child when it comes to meal time, here are eight  things you can do (and avoid) to help broaden your child’s diet.

If you’re interested in expanding your child’s palate, it’s important to introduce new foods at meal time consistently. However, offering too many too soon could overwhelm your child, creating the opposite effect of what you’re hoping for. Try introducing one new food at a time accompanied by familiar favorites.

It makes sense that kids will be more likely to eat the meal that’s put in front of them if they’re hungry. Limiting your child’s snacking, especially close to supper time, will hopefully improve their appetite, resulting in them eating more of their meal. Try offering your child one mid-morning and one mid-afternoon snack, skipping the snacks too close to supper.

Don’t Be Afraid of Condiments!

Not many people would argue that broccoli goes from meh to amazing with the simple addition of some ranch dressing. And never forget that a little bit of cheese can make just about anything good! Your child most likely feels the same way. Using condiments can help disguise the taste of certain foods they don’t like until they grow used to them. Even if your picky eater puts ketchup on everything, it’s getting them to eat foods that they normally would avoid— that’s a win!

Your child will be much more likely to try a new food if they are somehow involved in choosing it or preparing it. Maybe your child would enjoy visiting a farmer’s market or the produce section of the grocery store to find foods that look colorful or interesting to them. Depending on their age, you can also involve your child in preparing the food or setting the table for the meal to engage them in trying something new. Cutting veggies with a butter knife or tossing a salad is fun for kids— and it can lead to them eating foods they haven’t tried before!

Brush Up On Your Cooking Skills

Try not to take this one personally, but there’s a chance that your child prefers restaurants or processed foods because they don’t care for your cooking. Take this opportunity to learn new recipes with ingredients you think your child may like. Look at the spices and seasonings you’re using and try something on the other end of the spectrum. Experiment with more “exotic” seasonings and you might find that you’ve got a budding gourmet on your hands.

You Don’t Have to Be a Short-Order Cook

Preparing a different meal for your child than what the rest of the family is having is not the way to help them broaden their diet. However, make sure there is at least one part of the meal that you know your child will like. Consider planning meals that can be assembled with certain ingredients left out if your child dislikes some of the components of the meal. For example, creating a taco bar would allow a child who doesn’t like certain elements, like tomatoes or lettuce, to leave those off the taco entirely.

Maybe your little apple didn’t fall far from the tree. You yourself could be classified as a picky eater, particularly when it comes to certain foods. Unfortunately, it’s difficult to expect your child to try new foods if you’re not willing to try new foods, too. Model for your child how trying new foods isn’t bad by trying to broaden your own palate as well. Never tried Indian food? Experiment as a family. Instead of Taco Tuesday, try Tikka Masala Tuesday!

Don’t Force Them to Eat

There can be unintended but far-reaching emotional and physical consequences if you require your child to clean his plate before leaving the table. As an adult, your child may struggle with obesity, food addiction, or eating disorders as a result of their skewed relationship with food. Instead, encourage them to eat what they can and try a small portion of the food they aren’t sure about.

While dealing with a picky eater can be frustrating for parents, it’s important to keep your cool and make sure meal times don’t become the worst part of your family’s day. The good news is that even if your picky eater can’t be placated, this eating habit rarely leads to health issues or nutrient deficiencies unless extreme.

When it comes to your child’s growth, development and nutrition, the pediatric team at Johnson Memorial is here to answer your questions and detect issues. Contact our office today to make an appointment with one of our team members to discuss the health and well being of your child.