5 Foods in the Fight Against Cancer

Remember when Mom insisted you eat your fruits and vegetables?

She wanted you grow up big and strong. Today, she’s helping you fight cancer.

While research continues to focus on treatments for better outcomes, more evidence is indicating that eating healthy foods is important in the fight against (and prevention of) cancer.

The American Institute for Cancer Research says that no single food or food component protects people against having cancer. However, strong evidence “does show that a diet filled with a variety of plant foods such as vegetables, fruits, whole grains and beans helps lower risk for many cancers.”

Here are some foods that show evidence of effectiveness in the fight against cancer: 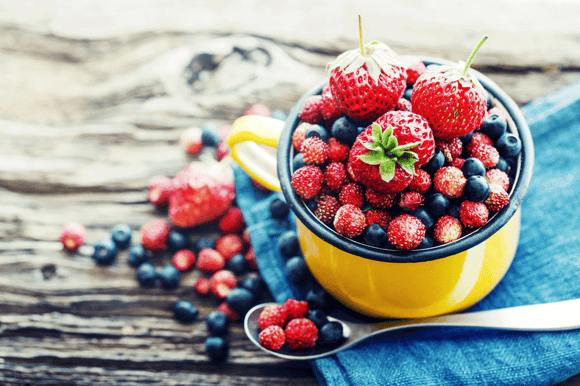 The National Cancer Institute says that several population studies show an association between increased intake of garlic and reduced risk of certain cancers, including the stomach, colon, esophagus, pancreas and breast. Ingredients in the pungent bulbs may keep cancer-causing substances in your body from working, or they may keep cancer cells from multiplying. Experts don’t know how much you need to eat to prevent cancer, but a clove a day may be helpful.

EverydayHealth.com says blueberries, blackberries, strawberries and other berries contain particularly powerful antioxidants, meaning they can halt a naturally occurring process in the body that creates free radicals that can damage your cells. Compounds in berries may also help keep cancers from growing or spreading.

The Physicians Committee for Responsible Research says that tomatoes (and marinara sauce) contain lycopene, one of the free radical-fighting antioxidants. Free radicals are damaging molecules that float around in the body disrupting cells and promoting disease. Antioxidants, such as lycopene, destroy free radicals so they can't attach to your cells and wreak havoc on your hard-working immune system. Some research has found that eating tomatoes may help protect men from prostate cancer.

Broccoli, cabbage, and cauliflower might be particularly helpful in in the cancer fight, according to NCI. Researchers have found that components in these veggies can protect people from those free radicals associated with colorectal, breast, lung and prostate cancers. They may also shield the body from cancer-causing chemicals, help slow the growth of tumors and encourage cancer cells to die.

Tea contains antioxidants called catechins. Epigallocatechin-3-gallate (EGCG) is the most abundant catechin in green tea and accounts for 50 to 75 percent of its total catechin content. The Truth About Cancer reports that EGCG has been shown to kill many different types of cancer cells in laboratory conditions. One way in which EGCG does this is by triggering the activity of so-called “pro-death” proteins, causing cancer cells to commit “suicide.”

Other foods shown to have promise in the fight include: